Elekon are now trialing a new "Batlogger M", this new detector has the added benefit of being able to hear in "real-time", a feature not available in the original detector. As with the first detector the 'M' is time expansion 10:1. 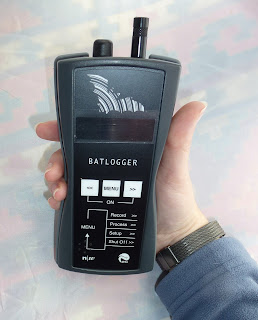 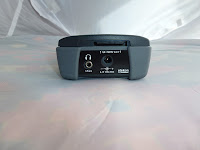 Using their well tried and tested "BatScanner" technology , this makes a really good detector retaining the GPS function and temperature recording is only the start. Using Elekon's "Bat Explorer" software a satellite image of the the locations of the recordings, excel spread sheet output and analysis of the recordings is achieved.

Quote from Elekon:
The new BATLOGGER M with many new features and improvements fresh out of development.
In addition to the established BATLOGGER system, following has been updated:

Although "Bat Explorer" is recommended for analysis "BatSound" (Pettersson Elektronik) can also be used to identify species from wav files recorded.


The sonograms created from the sensitive microphone are of the clearest and highest quality (as good as Pettersson's D1000X sonograms) for species identification, particularly of the harder to identify Myotis species. When using a bat detector for commercial purposes the main aim is to identify the species as accuartely as possible and with using this detector analysis becomes far easier and less time consuming.

A speaker is mounted inside the case and an earphone socket, when used, will cut out this speaker. The batteries are built into the unit and it has it's own charger, having used three Batlogger's for a couple of years we have not had any issues with the battery and it remains charged up for many days.

The new "Batlogger M" retains the ease of use in recording to an SD card (supplied with the device) and is in the same case as the earlier model, no separate recording system means the only wires are to ones headphones. The detector is still ergonomically designed, an important feature when you have to carry a detector around for a few hours on site. The case is also rubberised and so is unlikely to be dropped. The detector is also of a far reduced weight in comprison to many other detectors we have used, in fact even with the upgrades the weight does not seem to have increased greatly.

The menu system has been updated but is still very easy to use and instictive. You can literally pick this detector up out of the box, take it into the field and be using it within moments. It includes great features such as the running display showing: remaining SD storage, temperature, battery level indicator, GPS co-ordinants and number of satellites, peak frequency, sampling and recording notifications, date and time. The screen can be dimmed in order to not distract from surveying, the volume is easily adjusted. The great feature of the M is that it can now not only be used as a passive monitoring device simply as a logger but also as a field survey detector with the ability to listen. The delayed recording can be set up for two separate time recording periods within a single days monitoring. The settings of delayed start and thresholds etc can be adjusted both on the device but also using the ''BatPars Editor''.

It comes in a purpose built case along with the charger and earphones. The charger is of a european plug but this is no problem with an adapter. 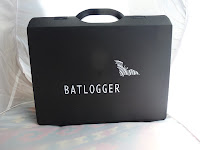 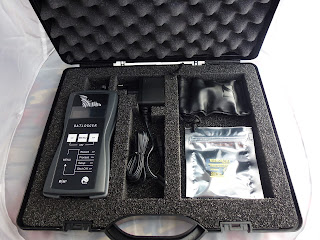 It should be noted that all of the software required for analysis and set-up is free to dowload from Elekon's website.

Testing of a NEW microphone is 'on going' it sounds very positive from the report we have had from Switerland we have been asked to test in wet conditions so watch this space.

The weather conditions have been cool and therefore bat activity has been low this autumn, however our resident long-eared bats in the church next door proved that there is very little loss with this microphone.  It has been used (weather permitting) a number of times in wet conditions and I understand that it has proved succesful over a long period in Switzerland. 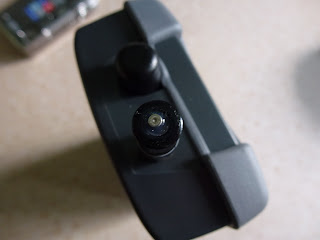 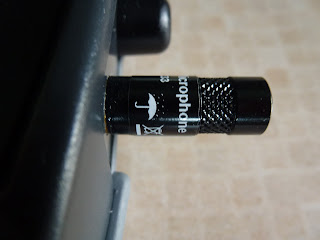 By Roger Jones and Sally-Ann Hurry 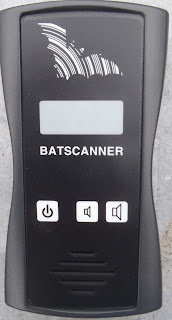 New from Elekon is the Batscanner detector, described as a 'frequency mixer' converts the echolocation to Heterodyne, this can be heard over the built in speaker or over headphones/earphones.

Simple switching is on/off and two touch buttons for up and down volume.

The display is excellent, it displays the peak frequency of the bat, therefore a Noctule passes and you get the corresponding frequency of that particular bat.

Sound can be recorded however the recordings in heterodyne are not suitable for software analysis.
A link between the detector and Video recorder works well bat sound on your film, nice!

I would like to see a wrist strap, I have seen too many pieces of equipment dropped, normally mine dropped by other people and I am not sure about the battery compartment's cover being held by screws, I would like quick access to check how much power is left before a survey not have to unscrew the cover when on site.

The controls are a plus side, frequency read-out is very good, it is not really a commercial bat surveyors tool but a good addition to ones kit if for example using an anabat.

It is powered by three AAA batteries which are accessed via a cover on the back which is held in position by two screws. (The velcro was added by me during video sound recording)
Although this detector is not yet available it will cost about 225 Swiss francs (£160.76 // $264.79 // 185.357 Euro) plus tax and shipping.